“Look” Like a Geek but Still Have Thin Lenses? No Longer Just A Dream

Certain looks are difficult to pull off with thick lenses, but advances in eye-wear and style are causing a change in the tide.  Specifically in the past 10 to 20 years, the word “geek” has und

ergone a massive transformation.  What was once considered a somewhat pejorative term about overly intellectual and socially inept individuals who are invested in unpopular topics has been flipped on its head and come a long way from the original definition from the early 1900s.  Due in part, due to the dawn of the technology age, “geeks” wear the title with a badge of honor.  The word is now more closely associated with individuals who take pride in their intense passion about a subject and are fully invested in spite of others’ opinions. Additionally, the topics that were once considered “geeky” are now widely love (see comics, technology, etc).  There can also be movie geeks, poetry geeks, or even food geeks.

Furthermore, there is now an entire culture associated with the word “geek” and like most cultures, they have their own behaviors and style. In fact, many think that the rise of the geek is a contradiction to the word’s definition in and of itself, but that is a topic for another post.  Regardless, this phenomenon extends to all aspects of life, including eye-wear.  Thick lenses and unattractive frames used to be an indicator of this status, but things are now different both within the culture as well as the larger society. Geeks now run the world, and new geek eye-wear setting the trend in industry.  This is so much the case that there is now a new spin on a classic style known as “geek” that marries the classic style with new lens technology. 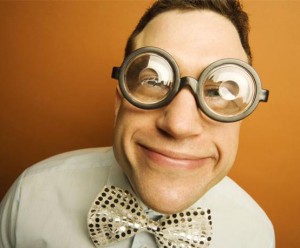 Traditionally, “geeky” glasses have been thick and cumbersome.  But with the introduction of thin high-index lenses, this does not have to be the case and style does not have to be sacrificed for function.  In fact, these glasses are designed with traditional “nerdy” wearers in mind.  First, let’s take a look at how the style has evolved to a place where this has become a popular demand.

What is “Geek” Eye-wear?

Original “nerd” style frames have a thicker plastic rim and square or rectangular shaped frames.  Think Revenge Of The Nerds without the tape.  These frames are comfortable, stylish, elegant, modern, and perhaps most importantly, fit pretty much any face especially when using high-index lenses.  It makes sense that if the traditional “geek” valued function over fashion, the glasses would be comfortable, and we are now in a time where comfort is king.  You can now add thin and light weight to that list of comfortable features.  The surge in popularity has recently been attributed to Japanese girls using them as opposed to traditional glasses that would get in the way of their eyelashes.