For people who wear glasses, there have always been a few special rules about dealing with the world. Where you put them, who you trust to hold them for you, and how you clean them aren’t just personal decisions, they’re lifestyle choices. Of course, life with visual correction hasn’t always been the way it is. 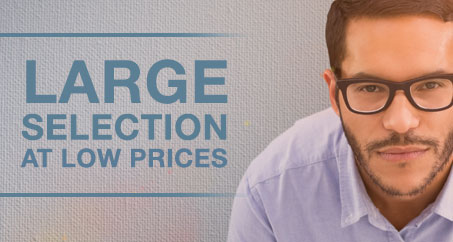 Only in the last three hundred years have glasses even been able to take on a recognizable form and glasses with earpieces weren’t popularized until a Hollywood actor we’ve all forgotten popularized them. In fact, the world of glasses and high index lenses is full of interesting facts about the history and odd superstitions surrounding the glasses wearing community. Here are our favorite ten fun facts about glasses:

1) The First Visual Correction Was a Reading Sphere

Attempts at visual correction started a very long time ago using the materials they had at hand. A long time ago, around about 1000AD, the first ‘lens’ was a glass sphere known as the ‘reading stone’. It was meant to be used by farsighted people as a primitive magnifying glass because if you roll it over one or two letter at a time looking directly through, you could see the letters larger than they were printed. They used the sphere because it was much easier to make a glass sphere back then than carefully contoured flat cylinders that take the form of lenses we would recognize today. This tool allowed the elderly and other naturally farsighted people to read basic writings but it was a far cry from modern visual correction.

2) ‘Glasses’ are Now Mostly Made of Plastic

Glasses got their unique name because there were made of to hand-crafted chips of glass, often mounted in leather or bone rather than the formations we’re used to. However, the name has very little to do with how we make glasses today. The vast majority of lenses are now primarily made out of plastic materials invented to be used as lenses. While plastic lenses were originally focused on to increase safety through shatter resistance, the sturdier materials were also more dense, increasing the refraction index of the resulting lenses and opening the doors for further high index lens development.

3) High Index Lenses are Thinner but Weigh the Same

You probably knew that high index lenses are thinner than other lenses, but did you know that they’re not actually any lighter? Most people associate thinness with being light-weight but that’s not how high index lenses work. They achieve the higher index by using denser material that bends light more efficiently, thus requiring less depth of material to get the optimal amount of visual correction. However, that denseness also means that the materials themselves are slightly heavier even though you use less of them. This means that thinner high index lenses weigh about the same as their standard index contemporaries for the same prescription.

4) Gold Earrings Were Once Considered Good for Eyesight

In all the history of visual correction, this fact is one of the strangest. Way back in the day, people used to believe that precious metals had special healing abilities and for sailors, eyesight was very important. After all, you had to be able to spot land from a long way off as well as other ships that might be a threat or potential prey if you’re a pirate. Pirates and other sailors in the time period would wear gold or silver earrings in an attempt to improve their eyesight or prevent it from deteriorating with age. While there is no sign that this worked, the primary functional purpose of the earrings seemed to mostly pay for their bodies to be shipped home and buried when they died at sea.

This one is surprising because we don’t think we know that many people who wear or need glasses, but the number is at least 25% with other statistics quoting 6/10 instead. The fact of the matter is that eyesight, like eye color or height, is something that varies wildly from person to person, even in families, so it should come as no surprise how many people need at least a little bit of correction. A large number of people are a little bit farsighted or nearsighted, but not enough to call attention to the issue in school or ever get a glasses prescription. There are also thousands of people who do have a prescription but don’t think of themselves as glasses wearers so don’t most of the time. Finally, there are contacts, making ‘secret’ glasses wearers of thousands more. Ultimately, those of us who wear frames with lenses every day are less alone than we thought.

Remember when your parents tried to discourage you from trying on each other’s glasses? Their reason was often that wearing the wrong prescription would damage your eyes, but this isn’t actually true. Just as you can’t cure your visual impairment by wearing the right prescription, you also can’t make it any worse by wearing your friend’s glasses for a few minutes. The disorientation and headache, on the other hand, are entirely real so your personal tolerance is its own control factor. Either way, this should be a comfort as you trade glasses around to see how blind your friends are, or lend your glasses to non-glasses-wearers so they can marvel at your blindness.

7) Earpieces Weren’t Invented Until the 1700s

One of the craziest things about glasses is how long they existed without earpieces. While spectacles were invented around the 1200s, temple pieces (earpieces) weren’t invented until the 1700s and even then weren’t popularized until the 1920s. Until then, people propped them on their noses (the glasses fell a lot) or held them on sticks. Some people tried to use nose pieces to pinch the glasses onto their noses like a clamp but these were uncomfortable. Briefly, the Spanish tried to introduce a ribbon to tie glasses to your head but these were quickly rejected as unfashionable. Many of the original temple pieces were worn with wigs, known as wig spectacles.

8) You Can Get High-Index Glass Lenses, But Most People Don’t

High index lenses are primarily made out of plastic. The first higher index lens material was a plastic invented for its shatter resistance, but after they figured out how the index of refraction works, it became possible to make high index glass lenses as well. These tend to be heavier but have the benefit of improved visual clarity and a lower chance of Abbe distortions. If you wanted traditional ‘glasses’ in with glass high index lenses, you can most certainly have them. Just be careful, as the thin glass lenses will be more susceptible to damage.

Even after temple pieces were invented and people could wear their glasses more easily, many people chose not to. People were very conscious of their appearances back then and bad eyesight was associated with old age and infirmity so people, especially women, began to use lorgnettes which are special fancy sticks to hold your glasses on and look through them temporarily. When they invented the hinge so glasses could fold down, they became the tech-addition of the decade, attached to everything from old-fashioned mechanical pencils to elegant hand fans.