Traditional lenses – the kind that have been around for centuries – form a spherical shape. This means the curve they follow is the same across the length of their surface. The degree of curvature will vary with the lens material and prescription, but the curve itself is cupped and completely round. 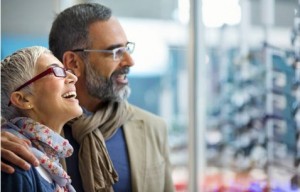 Aspheric lenses were developed to create a thinner profile. This profile often works hand-in-hand with high index material to produce a lens that is lighter, slimmer, and thinner than any lens created out of standard plastic or glass material. Because an aspheric lens follows a much flatter curve, it does not protrude from the frame as much as a conventional lens.

This advantage is especially beneficial to anyone who wears a strong prescription. Made spherically and of conventional glass or plastic, a strong prescription requires a lot of material, resulting in a very thick, very round lens. Cut the same prescription from high index glass or plastic and you produce a thinner, lighter lens. Cut it in an aspheric shape and you produce a lens that is flatter and fits better within a frame.

Aspheric lenses also play a role in reducing distortion. With any lens, distortion is a natural by-product, most noticeable as you look towards the ends of the curve. Reduce the curve and you reduce this distortion.

If you have the material, try this experiment: hold a clear glass or plastic bowl to your face and look through it. At the center your vision is clear and relatively distortion-free, but as you move your eyes towards the curved sides, distortion increases. Do the same with a flatter surface, say a clear glass or plastic dinner plate; holding it in front of your eyes, the distortion you see at the edges is significantly less than the bowl produced. Standard lenses are not as curved as a bowl, but that exaggerated shape gives you an idea of the concept.

When compared to regular, spherical lenses, aspheric lenses are:

If your prescription is moderately to severely strong, you may want to consider using aspheric, high index lenses for eyeglasses that are lighter, thinner, and flatter than anything possible with conventional lenses.